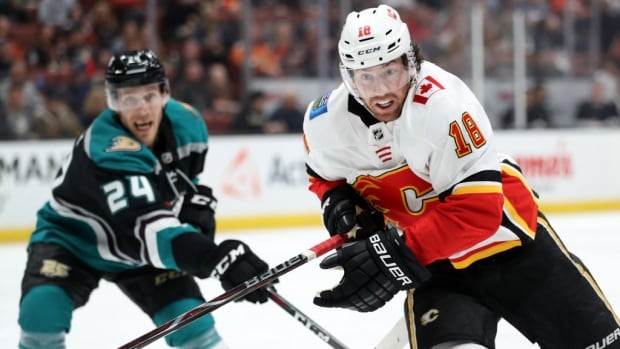 James Neal knows a thing or two about the NHL playoffs, which should come in handy for the Calgary Flames.

Calgary will look to the winger for leadership when the Flames begin their first-round series against the Colorado Avalanche on Thursday.

Neal was signed as a missing piece of the puzzle by Calgary over the summer after playing in the Stanley Cup final with the Vegas Golden Knights last year and the Nashville Predators in 2017.

Now, he will be seeking to propel the youthful Flames deep into the playoffs and, hopefully this time, actually win the Cup.

“For me it’s a clean slate. It’s a chance to prove yourself again. There’s no better time than having a great playoff run and helping your team win,” said Neal, 31, after a spirited practice Tuesday.

“I want to win a Stanley Cup and I know every team at the start of the year says that, but not every team makes the playoffs.”

Neal struggled offensively this season, ending up with seven goals and 12 assists after a 44-point campaign with Vegas last year. He also missed 19 games due to injury, but head coach Bill Peters isn’t worried.

“It’s been good to have him. He’s dialed in and he’s playing his best hockey so I expect him to have a real good playoffs,” Peters said.

The Flames don’t have a ton of playoff experience. In their most recent playoff appearance, Calgary was swept by Anaheim in the first round two years ago.

‘He’s the guy that’s been there’

“He’s the guy that’s been there,” Flames winger Matthew Tkachuk said of Neal. “He’s the guy we’re all asking questions [to] right now. Obviously some of us have a little taste but not a big taste and with him it’s all about being disciplined and controlling your emotions.

“This is his time of the year. It’s the time of year he’s going to step up. He’s done it in the past and we’re excited to see it first hand and we’re really lucky to have him and all his knowledge right now.”

Neal suited up for 20 playoff games last year, five more than Calgary has played this decade.

But he downplays the importance of playoff experience — Neal says success has more to do with desire.

“Obviously, I’ve been a lot of playoff rounds and different scenarios,” he said. “You learn a lot about the teams along the way and the way you have to go about things and what it takes to win.