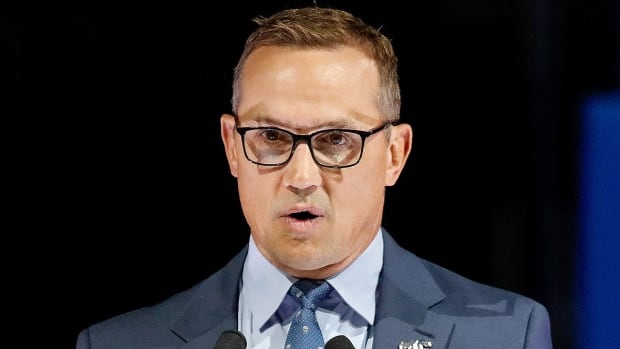 In a pre-training camp shocker, Steve Yzerman has left his post as general manager of the Tampa Bay Lightning.

Julien BriseBois, who arrived in Tampa eight years ago with Yzerman and served under him, has been named the seventh GM in franchise history. The 41-year-old had long been considered a future NHL GM.

Yzerman, in the final year of his contract, will stay in the organization as senior adviser.

“I’m very excited in my role changing which will allow me to spend more time with my family,” Yzerman, a married father of three daughters, told reporters Tuesday.

“We are all delighted that Julien is our next general manager. He’s more than ready and has earned the opportunity. He’s done an outstanding job” as GM of the Norfolk Admirals and Syracuse Crunch, the Lightning’s current American Hockey League affiliate.

Yzerman was noncommittal of staying with the Lightning beyond the upcoming season, noting he decided in late July to extend his deal as GM and it took time to finalize the details of his new role.

During the 2014-15 campaign, Tampa reached the 50-win plateau for the first time and set a new record with 32 home victories. The Cranbrook, B.C.-born, Nepean, Ont.-raised Yzerman was also rewarded for his hard work by the NHL, which named him GM of the year.

Prior to joining the Lightning, the 53-year-old spent four seasons as vice president with the Detroit Red Wings after retiring as a player with the team in 2006. Yzerman is a four-time Cup champion, winning three times as a player (1997, 1998, 2002) and also as a member of Detroit’s management team in 2008.

He took over in Tampa from the fired Brian Lawton, tasked with rebuilding a franchise that had fallen on hard times since capturing its lone Stanley Cup six years earlier.

“The long-term goal is to make this team a perennial contender.” Yzerman, a 2009 Hockey Hall of Fame inductee in his first year of eligibility, said at the time.

I assure you that everything will be done and nothing will be neglected in our pursuit of the [Stanley] Cup.— New Lightning general manager Julien BriseBois

“I assure you that everything will be done and nothing will be neglected in our pursuit of the Cup,” BriseBois said. “I’m very confident that we’re eventually going to win and be successful because we have an owner [in Jeff Vinik] that is committed to winning, having a world-class organization and providing us the necessary resources.”

Along the way, Yzerman, known for his emphasis on drafting and development, has watched homegrown players flourish such as Steven Stamkos, Nikita Kucherov, Tyler Johnson, Ondrej Palat and Alex Killorn.

In recent years, Yzerman became an integral part of Hockey Canada’s management team, serving as GM at the world championships in 2007 and 2008 when Team Canada brought home gold and silver medals, respectively.

Yzerman was the team’s executive director when it won gold in 2010 and 2014 at the Winter Olympics in Vancouver and Sochi, Russia.

BriseBois, who hails from Greenland Park, Que., previously worked for the Montreal Canadiens as vice president of hockey operations. As Lightning assistant GM, he had significant input in player personnel and player development, while overseeing analytics, contract preparation and negotiation and scheduling.

BriseBois‘ AHL clubs have reached the Calder Cup Final five times, winning in Hamilton in 2007 while he was with Montreal and five years later in Norfolk under head coach Jon Cooper, the Lightning’s current bench boss.