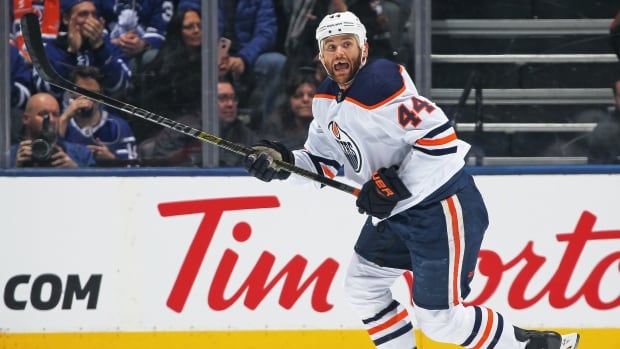 Edmonton Oilers forward Zach Kassian could be facing a hearing from the league after he kicked Tampa Bay Lightning defenceman Erik Cernak in the chest during the first period on Thursday night.

It happened during an incident inside the Oilers blue line when Josh Archibald, Kassian and Cernak were tied up down on the ice.

Meanwhile, Yanni Gourde scored a short-handed goal and Andrei Vasilevskiy finished with 29 saves to lift Tampa Bay to their ninth straight victory, 3-1, over the Edmonton.

As the Oilers’ Zack Kassian awaits his fate from the department of player safety, let’s look at how his kick to the chest of Tampa Bay’s Erik Cernak stacks up against ones of the past. 0:55

Tampa Bay also won its 10th in a row at home.

Vasilevskiy improved to 18-0-2 in his past 20 starts. Pat Maroon and Cedric Paquette also scored for the Lightning, who won despite playing without top two scorers Steven Stamkos and Nikita Kucherov.

“Injuries are tough, but everybody has them,” Lightning coach Jon Cooper said. “It’s part of the game, so you can’t cry foul or say why us — everybody gets hurt. It’s tough that we’ve had some pretty big names go down for us, but it doesn’t look like, hopefully, it won’t be long.”

Caleb Jones scored for Edmonton, which played its second consecutive game without Connor McDavid, who is out 2-to-3 weeks with a thigh injury. Mike Smith finished with 34 saves for the Oilers, who lost for the fourth time in regulation in the past 16 games.

“We had lots of compete in our game,” Edmonton coach Dave Tippett said. “We had some chances there that were kind of around it, but didn’t capitalize on it. Mistakes end up being the dictator of the game and we came out on the short end.”

Gourde, who ended a 35-game drought on Tuesday, scored the winner on a short-handed breakaway at 13:01 of the second period, beating Smith with a backhander over the shoulder.

“I don’t think, I just go,” said Gourde, who scored his fourth career short-handed goal. “When I picked up the puck, I thought [Smith] had a good gap on me and the bottom of the ice was closed, so I was surprised the puck went that high.”

Maroon opened up the scoring at 4:39 of the second period with his seventh goal of the season. After a shot from the right point by Luke Schenn deflected off Cameron Gaunce to behind the goal line, Maroon quickly found the loose puck and stuffed it between the near post and Smith’s left pad. The assist for Gaunce was his first NHL point since March 24, 2017, when he was a member of the Pittsburgh Penguins.

Edmonton pulled even at 9:36 when Jones cut down the slot and after his initial shot was blocked, picked up the rebound and fired a shot to the top corner for his third goal of the season.

Paquette scored into an empty net with 55.1 seconds left.