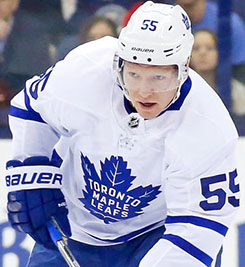 Swedish defenseman Andreas Borgman had a hell of a 2017. In April, he capped off his first SHL season by winning the SHL Championship with HV71 and being named the SHL Rookie of the Year. Just a couple weeks later, he signed a 2-year contract with the Toronto Maple Leafs. Then in September, he surprised a lot of fans by beating out fellow Swede Calle Rosen for Toronto’s 6th defensive spot.

Borgman played within the Timrå IK organization for four years, beginning with the 18U team at age 16. A year later, he was a force to be reckoned with for the 20U team, posting 21 points, 72 PIMs, and a +9 through 38 games. He also made his SHL debut for Timrå that year, appearing in five games at age 17, including two in the relegation playoff, which the team unfortunately lost.

In 2013-14, with Timrå’s men’s team now in the Allsvenskan (Sweden’s 2nd pro league), Borgman split the season between the 20U team and the men’s team. In 2014-15, Borgman kept his spot on the men’s team for the entire year, but was passed on in the NHL draft for his final year of eligibility.

After the 14-15 season, Borgman promptly signed with the Allsvenskan’s regular season champion VIK Västerås HK, and had his strongest year yet. His play earned him a contract with HV71, one of the SHL’s top teams, and thus began the best year of his young hockey life.

To have gone from playing for a middle-of-the-pack tier-2 Swedish team to making the Leafs’ roster on opening night in only 18 months is really impressive. Borgman will need time to fully adjust to the North American game, but his style of play seems to fit it very nicely. In February 2018, he was sent down to the Toronto Marlies of the AHL, but it was mainly due to the success of other young D-men in the organization and because Borgman can be sent down without needing to pass through waivers. He will be back on the Leafs again, and he shows all the signs of being a versatile and physical two-way defenseman in the NHL.