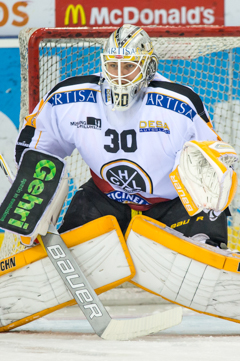 Elvis Merzlikins is a very athletic butterfly-Goaltender who is well sized and covers a lot of the net. He loves to challenge shooters and never gives up on a shot. Despite his decent reflexes, he is a goaltender who lets the puck hit him and control the rebounds. Needs to play a more composed game, as he tends to overplay certain situations. Handles the puck very well, as Elvis Merzlikins is a respectable stickhandler and can play long outlet passes. (by Rafik Soliman, April 2014)

Plays with a Swiss Player-licence and doesn’t count against the foreign-contingent in Switzerland.