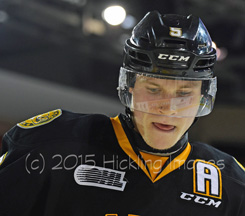 An unyielding two-way defenceman, Jakob Chychrun is a rising star with a toolbox bursting at the seams. Consistently displays elite four-way skating ability and is not afraid to throw his weight around physically. Plays with poise and composure through high pressure situations and, with the puck on his stick, can direct the play up-ice. Exhibits a particularly potent shot that works its magic on the power play and on the forecheck. Excellent first pass and uses his vision and awareness to keep the puck moving in the direction of the opposition’s tail or to a teammate with more time and space. Defensively adept at tracking the puck and staying a step ahead of the opposition. Proactive with his stick and body, exerting pressure on the opposition and forcing them to make hurried decisions.

All-in-all, a well-rounded two-way defender who competes with pro-level drive and makes his authoritative presence felt at both ends of the ice. (Curtis Joe, EP 2016)