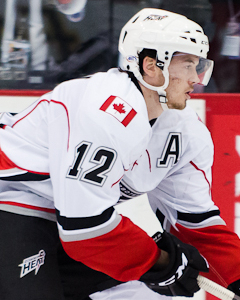 Paul Byron is a two-way forward with excellent speed and quickness. Owns very good puck skills and decent playmaking abilities. Has smallish size, but competes hard for the puck and will use his body, although his lack of size hurts his abilities to win space. A smart penalty killer, Byron excels in his play without the puck and his breakaway speed makes him a dangerous scorer, while shorthanded. (by Rafik Soliman, April 2016)